A prefix meaning not, without or to, toward.

A particular form of roof prism that can be used to invert an image. Because of the perpendicular end faces, it can be inserted between the objective and eyepiece of a telescope. If the roof is replaced by a plane surface, it becomes a reversion, or K, prism.

A deviation from what is normal, right, or natural. An image that does not have all rays of light converging on the focal point of a lens system due to defects in the lens system. The image formed deviates from the rules of paraxial imagery.

The loss of light as it passes through a material, generally due to its conversion to other energy forms (usually heat).

To learn more about absorption click here to go the the Biomedical Optics pamphlet.

Free of color; a color perceived to have no hue, such as neutral grays. Achromatic lenses transmit light without separating the light into its constituent colors.

The study of the interactions between sound and light.

To find out more about acousto-optics, click on the link to the Acoustics pamphlet, which discusses sound waves and music.

An optical system with object and image points at infinity. A system without focal length.

An optical tooling instrument consisting of an objective lens, a focusing lens, an optical micrometer, a reticle and an eyepiece. The alignment telescope projects a precise line of sight to which a number of targets at varying distances may be aligned accurately.

Designed by G.B. Amici; also known as a roof prism. It consists of a roof edge produced upon the long reflecting face of a right-angle prism. Used as an erecting system in elbow and panoramic telescopes. It erects the image and bends the line of sight through a 90° angle. 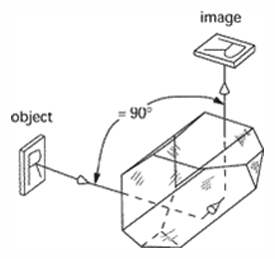 The disordered, glassy solid state of a substance, as distinguished from the highly ordered crystalline solid state. Having no clearly defined shape or form.

The increase in a signal that is transmitted from one point to another. Gain.

The maximum amount away from equilibrium for an oscillating system.

The angle formed between a ray of light striking a surface and the normal to that surface at the point of incidence. See image.

The angle formed between a reflected ray and the normal to the surface at the point it reflected from. This angle lies in a common plane with the angle of incidence, and is equal to it.

The angle formed between the refracted ray and the normal to the surface at the point of refraction.

A unit of distance corresponding to 10-10m, or 0.1 billionth of a meter. (Consider cutting a meter stick into a billion equal pieces, and then take one of those pieces and cut it into 10 equal pieces. Each of those last 10 pieces would be 1 angstrom.) One angstrom (Å) is 0.1 nm so that 200 nm corresponds to 2000 Å.

An optical instrument that uses a yellow light of varying intensity with red and blue lights of fixed intensity to test for colorblindness.

An opening or hole through which radiation or matter may pass.

A physical restraint that limits the diameter of the light allowed to pass through a lens. An example is shown below by "a." 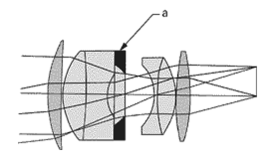 A term used for changing the shape of a signal or mathematical function. In optics it usually refers to changing the input of an optical system, for example, the use of a filter that can be varied to allow different light to be transmitted through.

A lens aberration that results in the vertical and horizontal image planes being spread to form lines instead of points.

To reduce, for example to decrease the intensity of a signal.

A reduction or loss, for example the reduction in intensity of a signal.

A single instrument combining the functions of a telescope and a collimator to detect small angular displacements of a mirror by means of its own collimated light. It consists of a lens with an illuminated reticle. The reticle usually carries several parallel lines subtending known angles at the lens. An electronic autocollimator provides a continuous output voltage, the sign and amplitude of which are related to the angular displacement of the mirror.

Used for measuring the line-of-sight distance to a reflecting surface. Usually used to measure the curvature of lenses.

A reference line used to describe distances and angles. In optics a common axis used is called the principal axis, which is a straight line that passes through the optical center(s) of curvature of a lens or mirror system.