A light-tight box that receives light from an object or scene and focuses it to form an image on a light-sensitive material or a detector.

16c., in Mod.L. camera obscura "dark chamber" (a black box with a lens that could project images of external objects), from L. camera "vaulted room," from Gk. kamara "vaulted chamber," from PIE base *kam- "to arch." Contrasted with camera lucida (L., "light chamber"), which uses prisms to produce a traceable image on paper beneath the instrument. Shortened to camera when modern photography began in 1840.

A system consisting of three single prisms that invert and revert the image, but do not deviate the line of sight. The line of sight is displaced by an amount depending on the distance between the first and second prisms. 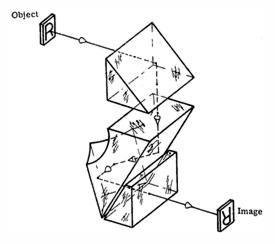 A two-mirror design used in astronomical telescopes. The primary mirror is concave, parabolic and has a hole in its center to allow light to pass. The secondary is a smaller hyperbolic, convex mirror. The image formed is located behind the vertex of the primary. There are many variations of this system.

An optical system that uses mirrors and lenses for image formation.

A vacuum tube with an electron gun at one end and a fluorescent screen at the other. Electrons emitted from a heated filament are accelerated by a series of annular anodes at progressively higher positive voltages. These emitted electrons form a beam, which is deflected by two pairs of electrostatically charged plates or electromagnets located between the gun and the screen. Upon striking the screen, coated with phosphor (often with red, green, and blue zones), fluorescence occurs emitting light. 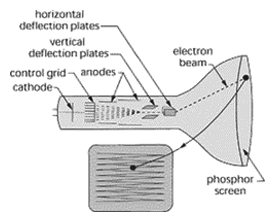 An optical system that only uses mirrors for image formation.

From G.k katoptrikos, from katoptron, "mirror." Of or relating to mirrors and reflected images.

1) The hollow of a body. 2) An optical resonator whose resonant modes can be used in laser systems. 3) A device used to select waves of a particular frequency.

The center of the sphere whose surface can be used to describe the location and curvature of the surface of a lens or mirror.

Also called principal ray. The ray that passes through the center of an aperture stop in an optical system.

An instrument designed to analyze the optical effects of color.

A lens aberration resulting from the normal increase in refractive index of all common materials toward the blue end of the spectrum.

The low-refractive-index material that surrounds the core of an optical fiber, whose purpose is to contain core light while protecting against surface contaminant scattering.

The opening of an optical system, or its components, which limits the extent of the bundle of rays on the given surface. It is usually circular and specified by its diameter.

Properties of correlation between a single wave or multiple waves. The more one is able to predict a second wave based on information of the first wave, the more correlated and the more coherent the two waves are.

The length over which waves maintain a specified degree of coherence.

A beam of light whose photons all have the same wavelength, phase, and direction.

To learn more about coherent beams visit the Lasers pamphlet.

A mirror whose coating reflects visible radiation and transmits the infrared radiation.

1) to make parallel, to line up. 2) The process by which a divergent beam of radiation or particles is converted into a parallel beam.

Light whose rays are nearly parallel and therefore will spread slowly as it propagates.

Visit the Laser pamphlet to learn more about collimated light.

The hue, saturation, and brightness that is visibly detectable.

A lens aberration resulting from different magnifications in the various lens zones.

Characterized by having the same center.

A single positive lens or group of lenses in a projection system that collect light and cause it to be evenly distributed.

From M.E. condensen, from O.F. condenser, from L. condensare "reduce volume or compass of."

From L. conducere "to lead together" and L. focus " hearth, fireplace."

Light emitted from one element is focused on the other and vice versa.

The apparent difference in brightness between light and dark areas of an image.

A way for a musician to modify the musical instrument to affect the sound it produces. Musical instruments including the voice, allow musicians to change pitch, loudness, even the tone color to some degree. For example, a trumpet can play the same note loud, brassy, and bright, or softer with a mellow tone.

To learn more, click on the link to the Acoustics pamphlet, which discusses sound waves and music.

1) Comes together from different directions. 2) The bending of light rays toward each other.

1571, from M.Fr. convexe, from L. convexus "vaulted, arched," pp. of convehere "to bring together," from com- "together" + vehere "to bring." Possibly from the idea of vaults carried together to meet at the point of a roof.

The light-conduction portion of an optical fiber, defined by the region of high refractive index.

A compound prism formed by cementing together two 30° prisms, one of right-handed and one of left-handed quartz. It has good ultraviolet-transmitting qualities and no double refraction.

The smallest angle of incidence at which total internal reflection occurs. When the critical angle is exceeded, the light is totally reflected back into the denser medium. The critical angle will vary with the indices of refraction of the two media:  and is shown below by "c." 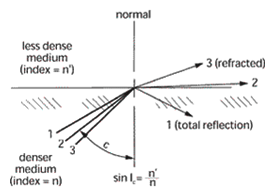 The positioning of two Nicol prisms so that their axes are at right angles to each other. Using this arrangement, light transmitted by one prism will not be transmitted by the other.

The measure of departure from a flat surface, as applied to lenses; the reciprocal of radius.