An endoscopic surgical instrument that includes a channel for the introduction of supplementary instruments.

Often called the ‘voice box,’ it is located at the top of the windpipe at the lower end of the throat. It is made up of muscles, membranes and cartilages, and contains the vocal folds (vocal cords).

To learn more, click on the link to the Acoustics Pamphlet.

The term LASER is an acronym for Light Amplification by Stimulated Emission of Radiation. It represents an optical source that produces photons (packets of light energy) that are coherent (in phase), collimated (along a straight line), and monochromatic (of the same frequency or wavelength). Lasers consist of a resonant cavity made usually with two reflecting surfaces, a gain medium, and an energy source. The gain medium can be a solid, liquid, or a gas.

1960, acronym for "light amplification by stimulated emission of radiation."

A lens aberration resulting in image size variation as a function of wavelength.

See defintion for "angle of incidence" and "angle of reflection."

States that the ratio of the sine of the angle between the normal and refracted ray is a constant. See definition for "angle of refraction."

To learn more about LEDs click on the link to the Solid-State Lighting Pamphlet.

This prism inverts and reverts the image while laterally shifting the image by an amount equal to 3A, as shown in the figure. 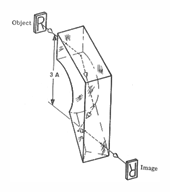 A transparent optical component consisting of one or more pieces of optical glass with surfaces so curved that they serve to converge or diverge the transmitted rays from an object, thus forming a real or virtual image of that object.

1) The length of time something is in a certain state, such as an electron bound to an atom, in an energy level higher than its ground state. 2) Lifetime is the number of hours a bulb lasts before it burns out. LEDs last for 30,000 to 50,000 hours, which is 50 times longer than incandescent lamps and 5 times longer than fluorescent lamps.

To learn more about this, click on the link the Solid-State Lighting pamphlet.

An electromagnetic wave that is visible to the eye. The elementary particle that defines light is the photon. Visible light ranges from 400 to 750 nm in wavelength.

To learn more about this, click on the link the Polarization pamphlet.

The process by which white light is separated into its component wavelengths. Prisms and gratings are dispersion devices. 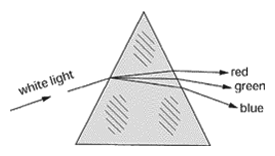 Light is an electromagnetic wave that is visible to the eye. The elementary particle that defines light is the photon.

To learn more, click on the link to the Spectroscopy pamphlet.

Most simply defined as the discharge of electricity from one cloud to another, or from a cloud to the ground.

A small half-shade analyzer placed in the eyepiece of a polarimeter to determine the character of the polarized light emitted by the instrument. It consists of a Nicol prism situated so that it covers half of the eyepiece's field of view.

A material that possesses less geometrical regularity or order than normal solid crystals, and whose order varies in response to alterations in temperature and other quantities.

A display formed by sandwiching a layer of liquid crystal material between two sheets of glass; a transparent conductive coating on the glass is etched to form character segments. An applied voltage causes the appropriate segments to darken as the liquid crystal changes arrangement.

Data communications network in a clearly defined geographical locatio, and extending no more than a few miles in length. It generally takes in an office building or group of buildings, a campus or the like, offering many nodes and connecting computers and peripherals with high-capacity links.

A medium that scatters or absorbs radiation that passes through it.

Glowing or giving off light.

A unit of measurement equal to the amount of light emitted per second in a unit solid angle of one steradian from a uniform source of one candela.

L. lumen, "an opening, light." A unit of light in the SI system.

An object that gives light, such as a celestial object like the Sun or Moon.

c.1450, "source of (artificial) light," from M.Fr. luminarie "lamp, light," from L.L. luminare "light, torch, lamp, heavenly body," lit. "that which gives light," from L. lumen (gen. luminis) "light." Luminosity in astronomy sense of "intrinsic brightness of a heavenly body" (as distinguished from apparent magnitude, which diminishes with distance), is attested from 1906.

Relating to light perceived by the eye, rather than the actual energy associated with the electromagnetic radiation.

Related to the moon.