A curve that has the algebraic form
,

where “a” is a constant.

1579, from Gk. parabole "parabola, application," so called by Apollonius of Perga c.210 B.C.E. because it is produced by "application" of a given area to a given straight line. 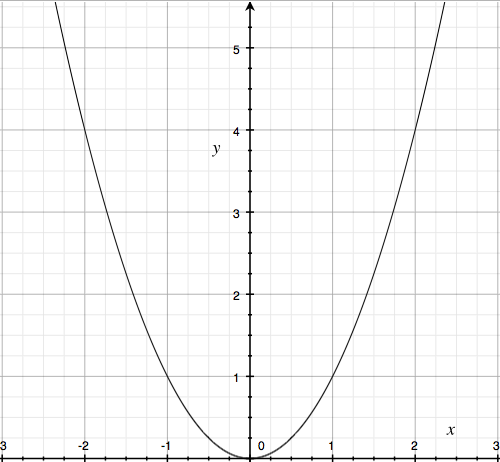 A surface that has the shape of a parabola. For a reflective surface, parallel rays striking the surface are reflected and focused at the parabola’s focal point.

The difference in the apparent position of an object when viewed along two different lines of sight. Humans utilize the parallax between their eyes to determine depth.

A prism made up of two air-spaced components. It has the ability to revert or invert an image depending on how it is placed. It can be used in convergent, divergent, and parallel light. It may be rotated to compensate for image rotation.

A dispersing prism, often used in monochromators (a device that transmits a narrow range of wavelengths). It is composed of a common right-angle prism with 30° dispersing prisms attached to its perpendicular faces. The spectrum formed is the same as if the two 30° prisms were joined together to form a single 60° prism, but turned through a right angle.

A five-sided prism containing two reflecting surfaces at 45° to each other, and two refracting faces perpendicular to the entering and emerging beams. The deviation angle of 90° is independent of any rotation of the prism about an axis parallel to the line of intersection of the two reflecting faces. Some common uses are an end-mirror in a rangefinder and an "optical square'' in surveying and alignment machinery.

Repeating in time at regular intervals.

A wave of energy in which each point of the wave is repeatedly displaced at equal time intervals.

An optical instrument designed to displace the line of sight in a vertical direction. Used often in submarines. 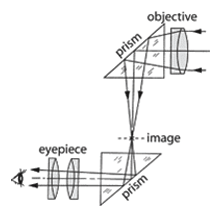 To cause a change in a physical system.

c.1374 (implied in perturbation), probably via O.Fr. perturber (14c.), from L. perturbare "to confuse, disorder, disturb," from per- "through" + turbare "disturb, confuse," from turba "turmoil, crowd."

A particular stage in a periodic process or phenomenon. The fraction of a complete cycle elapsed as measured from a specified reference point and often expressed as an angle.

To learn more about phase, click on the link to the Lasers pamphlet.

The difference in phase for two waves with the same frequency. 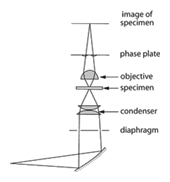 (v.) - 1924 in the sense of "make a photographic reproduction," from photo- "light" + copy (q.v.). The usual modern meaning arose 1942 with the advent of xerography. The noun is recorded from 1934. Photostat (1911) was a type of copying machine (trademark Commercial Camera Company, Providence, R.I.) whose name became a generic noun and verb (1914) for "photocopy."

A phenomenon discovered by Einstein in the early 20th century in which electrons are ejected from a solid when impinged upon by electromagnetic radiation. This led to the understanding of light as particles, or photons. The energy required to strip an electron from an atom is called the ionization energy.

An image created by light from an object striking a light sensitive surface such as a CCD (Charge-Coupled Device) or CMOS (Complementary Metal-Oxide Semiconductor) for electronic images, or photographic film.

(n.) - 1839, "picture obtained by photography," coined by Sir John Herschel from photo- + - graph "instrument for recording." The verb and photography also are first attested 1839, all from a paper read before the Royal Society on March 14, 1839.

The process of recording of an image on a light sensitive medium.

The science and technology of generating and harnessing light. This includes the science of emission, transmission, modulation, signal processing, amplification, and detection, of electromagnetic radiation in the ultraviolet, visible, and infrared regions.

The branch of optics that studies interference, diffraction, polarization and other phenomena for which the ray approximation of geometric optics is not valid.

A camera that is essentially a light proof box with a small hole (aperture) on one side. The light from a scene goes through the aperture and creates an inverted image on the other side.

A surface that has no curvature.

A lens with one plane surface and one concave surface.

Plasma channels are formed when a high-powered laser operates at a certain frequency, providing enough energy for an atmospheric gas to break into its ions. A plasma channel has a low electrical resistance and, once formed, will permit continuous current flow if the energy source that heats the plasma can be maintained.

To learn more about plasma channels click on the link to the Lasers pamphlet.

To align in a certain direction.

Light in which the electric and magnetic fields each vibrate in a single plane.

To learn more about polarized light click on the link to the Cross Polarization pamphlet.

1) To make smooth and glossy. To burnish. 2) The optical process, following grinding, that puts a highly finished, smooth surface on a lens or mirror.

A 45°-90°-45° reflecting prism whose surfaces form the 90° angle reflecting the light beam through a total angle of 180°. Two of these prisms are used in succession in a prism binocular. For each set of prisms as shown below, the image in both inverted and reverted. 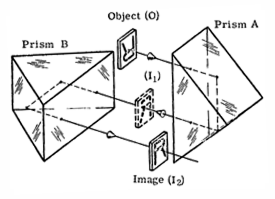 1) The rate at which energy is transferred, used, or transformed. 2) With respect to a lens, it is the reciprocal of the focal length.

The surface in a lens or lens system at which the projections of entering and exiting rays intersect.

Also called chief ray. The ray that passes through the center of an aperture stop in an optical system. 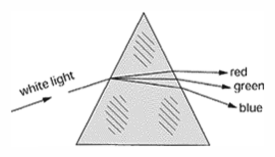 A hole (aperture) in the center of the iris (aperture stop) in the eye. The pupil allows light to enter the retina.