The distance from the last surface of a lens to its image plane. 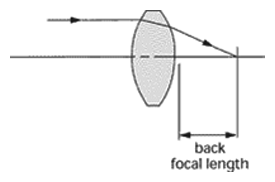 1) To restrain or regulate. 2) A device used to restrain flow in a particular direction. 3) An opaque shielding device designed to reduce the effects of stray light on an optical system.

1548, "to disgrace," perhaps a Scottish respelling of bauchle "to disgrace publicly" (especially a perjured knight), prob. related to Fr. bafouer "to abuse, hoodwink," possibly from baf, a natural sound of disgust, like bah. Meaning "to bewilder, confuse" is from 1649; that of "to defeat someone's efforts" is from 1675. The noun sense of "shielding device" is first recorded 1881.

An optical scanning device designed to shine light upon and detect the light reflected from printed information in the form of bars of different size. The detected light signal is then converted to an electrical signal.

An optical device for dividing a beam into two or more separate beams. A simple beamsplitter may be a very thin sheet of glass inserted in the beam at an angle to divert a portion of the beam in a different direction. A more sophisticated type consists of two right-angle prisms cemented together along their hypotenuse faces, with one face already coated with a metallic or dielectric layer having the desired reflecting properties (e.g. the percentage of reflection and the desired color). An example that uses a three-way beamsplitting prism is color television cameras. Multilayer films are deposited on the interfaces to divert red and green light to two vidicons, leaving the blue image to pass through to the third vidicon tube.

A two-part lens that has a different focal length for each part. Used in eyeglasses to correct for near and far vision.

1888, from bi- + focal (see focus). Conceived by Benjamin Franklin, but he called them double spectacles.

1) An instrument having a pair of decentered lenses (telescopes), one for each eye, used to magnify objects. 2) Using, relating to, or adapted to both eyes. 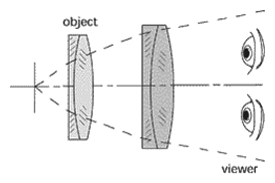 A microscope designed with two eyepieces (oculars), permitting the use of both eyes when viewing through the instrument. 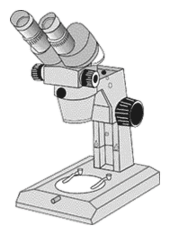 Black and White photo is often abbreviated B/W or B&W photo. It is a term referring to a number of monochrome forms in visual arts.

To learn more, click here to go to the IR Imaging pamphlet.

1) To hollow out. 2) The hollow part in a tube, pipe, or barrel. In optics a central hole running the length of a waveguide or laser tube.

An instrument used to view inside a small hole or structure. A long narrow tube that contains a telescope system with relay lenses. A lamp located in front illuminates the inside of the bore, and the inclusion of a small 45° mirror often permits detailed examination of the tube wall. Used to view inside pipes, oil wells, or gas mains. Some small borescopes and most types of medical endoscopes are now equipped with a fiber optic bundle for image and/or illumination transfer.