A compound lens system that has an entrance or exit pupil at infinity, created by placing an aperture stop at one of the lens’s focal points. It produces a two dimensional view of a three dimensional object with projection lines parallel to the plane of the image. The chief rays are parallel to the optical axis in front or behind the system of lenses depending on if the entrance pupil is at infinity or the exit pupil.

Telecentric - From Greek tele-, "far off." The pupil(s) of a system are at infinity.

A compound lens constructed so that its overall length is equal to or less than its effective focal length.

An afocal optical device made of lenses and/or mirrors, usually with a magnification greater than unity, and renders distant objects more distinct by enlarging their image on the retina.

A prefix meaning a trillion or 1x1012

A terawatt is 1000 billion watts, a quantity of energy that would require more than 500 nuclear reactors or thousands of coal-burning plants to produce.

To learn more about terawatts click on the link to the Lasers pamphlet.

A lens with a non-negligible thickness.

A thin layer of a substance deposited on an object, often for antireflection, filtering, or polarization effects (among others).

A lens with two different optical powers and focal lengths in directions perpendicular to each other. Usually one direction of the lens is shaped as the surface of a torus, and the other direction is spherical.

Formed by sweeping a circle a distance r away from an axis. If r is greater than the circle’s radius, the object swept out is called a ring torus, as shown below.

from Gk -oeids, from eidos, "shape, form" and tor(us) to mean a surface generated by a closed curve rotating about, but not intersecting or containing an axis in its own plane. 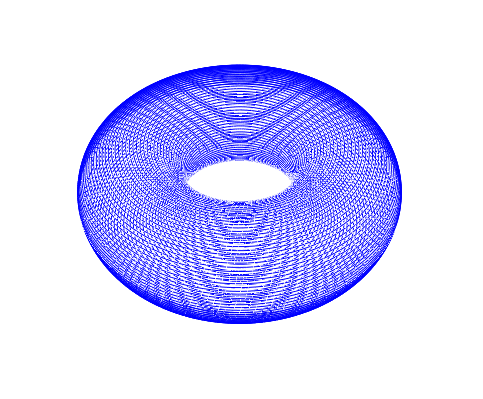 A phenomenon occurring when light is incident on an interface between two transparent materials at a very shallow angle. The light must be traveling through a medium with a higher index of refraction than the neighboring medium. At the interface, all of the light is reflected back into the surrounding material and none of the light is transmitted into the neighboring material.

To learn more about total internal reflection click on the link to the Fiber Optics pamphlet.

The action or state of being transmitted.

1) To send or convey something from one person, place, or thing to another. 2) The passage of heat, electromagnetic radiation, sound waves, or other energy through a medium.

1) Something that lets light pass through undistorted so you can see objects behind it. 2) A material is transparent in a region in which it is capable of transmitting electromagnetic radiation with little absorption and no appreciable scattering or diffusion.

1) Across from something. 2) A transverse wave oscillates perpendicular to the direction it travels in.

Transverse - 1621, from L. transversus "turned or directed across," pp. of transvertere "turn across," from trans- "across" + vertere "to turn."

A device that provides a contour map of the emergent wavefront in terms of the given wavelength of the light. 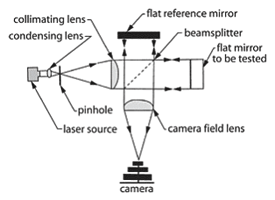