An interferometer derived from the Twyman-Green interferometer. Light is split along two paths. Light passing through a sample region in one direction recombines with the light from the second path without traversing the sample twice. The instrument is used to study transparent objects and is particularly useful in studying wind tunnel gas dynamics. 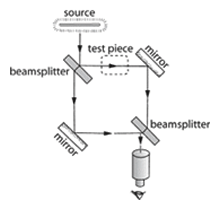 A device (usually a lens or system of lenses) that produces an image that appears larger or smaller than the corresponding object.

To cause an image to appear larger or smaller than the corresponding object. An image can be magnified by use of a lens or mirror. When we look through a lens, we often see things magnified: convex lenses often magnify objects larger, while concave lenses always magnify objects smaller.

c.1380, "to speak or act for the glory or honor (of someone or something)," from O.Fr. magnifier, from L. magnificare "esteem greatly, extol," from magnificus "splendid" (see magnificence). Meaning of "use a telescope or microscope" is first attested 1665.

Magnification is sometimes referred to as power. For example a lens system with “40x power” means a lens system that produces an image 40 times larger.

Rays that pass through an optical system near the edge of the aperture.

"Microwave Amplification by Stimulated Emission of Radiation." The MASER, created in 1952, was the predecessor of the laser created in 1960.

1) The curve on the surface of a liquid in a container caused by surface tension. The meniscus may be convex (lower on edges) or concave (higher on edges). 2) A lens that has one convex surface and the other is concave.

A ray that lies in the plane that contains the optical axis and the point on the object from which the ray originated.

1) The basic unit of length in the SI system, symbolized by m. One meter is about 3.28 feet. 2) Any device used for measuring.

From Fr. -mètre, and Gk. metron, "measure." Measuring device. "unit of length," 1797, from Fr. mètre, from Gk. metron "measure," from PIE base *me- "measure" (cf. Gk. metra "lot, portion," Skt. mati "measures," matra "measure," Avestan, O.Pers. ma-, L. metri "to measure"). Developed by Fr. Academy of Sciences for system of weights and measures based on a decimal system originated 1670 by Fr. clergyman Gabriel Mouton. Originally intended to be one ten-millionth of the length of a quadrant of the meridian.

The science of measurement, particularly of angles and lengths.

It produces interference fringes by splitting a beam of monochromatic light so that one beam strikes a fixed mirror and the other a movable mirror. The reflected beams are then brought together and combined, producing an interference pattern as shown on the detector in the image below.

An interferometer constructed to be positioned on a telescope to measure the angular separation of the components of double stars. 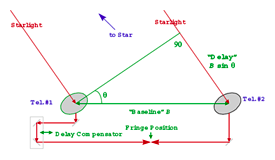 1) An instrument used to magnify small objects. 2) Optical microscope: An instrument consisting of a tube with an objective lens at the distant end and an eyepiece at the near end. The objective forms a real image of the object in focal plane of the eyepiece where it is observed by the eye. The total magnification is equal to the linear magnification of the objective multiplied by the magnifying power of the eyepiece. Optical microscopes typically have a maximal magnification of 1500 and a resolution limit of 0.2 micrometers. 3) Electron microscopes and other types of microscopes use other processes to create magnified images of objects.

An eyepiece located at the near end of the microscope tube. It often is a simple Huygens eyepiece, but compensating and flat-field projection eyepieces are quite efficient. Negative eyepieces are sometimes used as projection relay lenses in photomicrography (a photograph or digital image taken through a microscope). 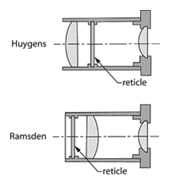 Investigation by means of a microscope.

The distortion of an object’s true image as the result of atmospheric disturbances along the path traveled by the light.

A smooth, highly polished surface for reflecting light that may be plane or curved. The actual reflecting surface is usually a thin coating of silver or aluminum on glass.

1) A stationary vibration pattern, for example, the state of an oscillating system such as a laser that corresponds to a particular field pattern and one of the possible resonant frequencies of the system. 2) The characteristic of the propagation of the light through a waveguide that can be designated by a radiation pattern in a plane transverse to the direction of travel.

Changes in a wave train, such as amplitude or frequency modulation in radio. Is also used to mean “contrast” when applied to a series of parallel lines ad spaces as imaged by a lens.

A device that varies the amplitude and phase of a light beam; e.g., from a laser or by sound waves. Also known as a Bragg cell.

A pattern developed from interference or light blocking when gratings, screens, or regularly spaced patterns are superimposed on one another. When converging lines in the picture are practically parallel to the scanning lines, a moiré pattern will naturally form.

(n.) - Fr. pp. of moirer, "to water," from mouaire, moire. Probably alteration of Eng. mohair. Having a wavy or rippled surface pattern. Moire effect: superimposing a repetitive design, such as a grid, on the same or a different design in order to produce a pattern distinct from its components.

Light consisting of only one wavelength or a very narrow band of wavelengths.

An instrument for isolating narrow portions of the spectrum by using a prism or grating.

An eyeglass used to correct the vision of a single eye. More common today is the pair of lenses, corrective or not, encased in a frame known as a pair of eyeglasses.