A thin membrane that separates the external ear from the internal part of the ear. Sound waves make it vibrate; this vibration is transferred to three bones of the middle ear.

To learn more, click on the link to the Acoustics pamphlet.

Reflections or repetitions of sound waves. Echoes can be produced and heard by clapping hands or shouting in a large empty room with hard walls or in a cave.

To learn more, click on the link to the Echolocation pamphlet.

The method used to detect objects by producing a specific sound and listening for its echo.

To learn more, click on the link to the Echolocation pamphlet.

1) The outside limit of an object, surface, or area. 2) The sharpened side of a blade. 3) The line where two surfaces meet. In optics it is sometimes used to refer to the surface that limits the aperture of a lens or prism, or the outer boundaries of a lens or prism.

A refracting telescope that uses a prism to bend the line of sight 90°.

One of the four fundamental forces (gravitational, electromagnetism, strong nuclear, and weak nuclear force) in nature, all of which are non-contact forces. Electromagnetism is a force that acts between particles that have charge (or its constituents have charge). It includes the electrostatic force acting between stationary charges and the electric and magnetic forces acting between charges moving relative to each other.

The total range of frequencies (sometimes given as the range of wavelengths) that can be generated physically. The range extends from practically zero to infinity and includes the visible portion of the spectrum known as light.

One of the elementary particles of nature. The electron has a charge of

where C stands for Coulombs, and a mass of

where kg stands for kilograms. Electrons orbit the nuclei of atoms, have specific and discrete allowed energy values depending on the nuclei they orbit, and are important in molecular bonding.

A device utilizing an electron beam for the observation and recording of submicroscopic samples with the aid of photographic emulsions or other short-wavelength sensors. With the electron microscope, the maximum useful magnification is over 300,000.

The change of optical properties of a material (for example the refractive index) under the influence of an electric field that varies slowly compared to the frequency of light.

An instrument to determine the presence and amount of charge on an object. It was the first electrical measuring instrument and is often used to display properties of electrostatics.

The collection of electromagnetic frequencies (spectrum) emitted by a radiating source.

A source of radiation.

A medical instrument used to view inside the human body by inserting the instrument into a natural or created aperture. The endoscope contains a tube, a light delivery system, lenses, often optical fibers, and sometimes other medical instruments. It may relay the image to the eye or a television camera.

The ability to do work (to move an object a distance). Energy can be divided into two main categories: kinetic (having to do with motion), and potential (having to do with energy stored due to an object’s location in space, or the position of its constituents). Energy is always conserved and can be transferred from one object to another. It is a scalar quantity, meaning it has no direction associated with it.

To learn more, click on the link to the Acoustics pamphlet.

The ratio of the energy output of a system for a specific purpose to the total energy input of the system. For example, the ratio of the amount of light emitted to electric power consumed by a bulb. The amount of light is measured in units of lumens (lm) and electric power is measured in Watts (W). Incandescent lamp efficiency is 15 lm/W. Fluorescent lamp efficiency is 60 lm/W. With an efficiency of 100 lm/W, LEDs are much better than the rest.

To learn more, click on the link to the Solid-State Lighting pamphlet.

Two flat glass surfaces separated by a spacer, with the inner surfaces of the plates coated with a partially reflecting layer.

The image of the aperture stop as seen from image space in an optical system.

The organ of vision or light sensitivity. 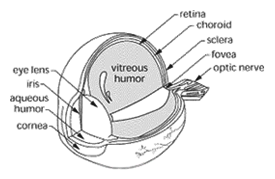 The lens system between the final real image on a visual optical system and the eye. Often seen in microscopes.