Sometimes called f-stop, f-ratio, focal ratio, or relative aperture. The ratio of the focal length of a lens to the diameter of the entrance pupil.

A multiple beam interferometer, usually consisting of two parallel highly reflective mirrors. The mirrors are parallel to each other so light can bounce back and forth several times. The same device utilizing a plate with two highly reflective surfaces rather than mirrors is called an etalon.

For more information on femtoseconds and where they are used, click the link to the Lasers pamphlet.

Also known as the principle of least time. Light traveling between two points will take the path that requires the least transit time.

Short for optical fiber, which is a thin filament of drawn or extruded glass or plastic having a central core and a cladding of lower index of refraction to promote internal reflection.

To learn more about fiber optics click on the link to the Fiber Optics pamphlet.

A glass or plastic fiber used to transmit information contained in a beam of light.

To learn more about fiber optics click on the link to the Fiber Optics pamphlet.

A physical quantity that has a value at each point in space. Fields extend throughout space, contain energy, and describe what force a particle would feel if placed at a location within the field. For example, in classical physics the gravitational field of an object describes the force per unit mass at each location of space; an electric field produced by a charge describes the electric force per positive unit of charge.

The maximum area that can be seen through a lens or an optical instrument.

An aperture located at an image plane of an optical system that determines the size and shape of the image.

A fine or thinly spun thread, fiber, or wire. An electrical filament in an incandescent light bulb can be used to emit light due to its high temperature.

For more information on filaments click the link to the IR Imaging pamphlet.

A device that attenuates particular wavelengths or frequencies while transmitting others with little change.

A type of interferometer noted for producing narrow multiple-beam interference fringes. Compared with the Twyman-Green interferometer, the Fizeau interferometer has fewer optical components, does not have the large beamsplitter and can be adjusted to a greater accuracy. 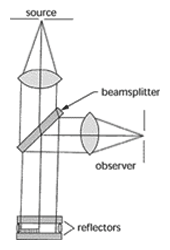 Fluorescence is the emission of light by an atom or molecule that has absorbed electromagnetic radiation, usually of a different wavelength (energy). Typically it is a conversion of a shorter wavelength of light (having higher energy) into longer wavelength (having lower energy) by an atom or molecule. LEDs always produce a narrow spectrum of wavelengths. Phosphors coated on the LED can absorb this light and fluoresce to produce longer wavelengths. White light LEDs utilize fluorescence to convert the specific wavelengths that they produce into a spectrum that looks white.

To learn more about fluorescence click on the link to the Solid State Lighting pamphlet. 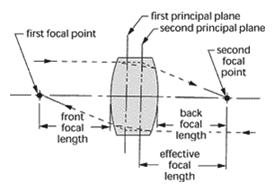 The plane on which the best focus is formed.

The point on the optical axis of a lens or mirror, to which an incident bundle of parallel rays will converge, or from which they appear to diverge, as after refraction or reflection in an optical system.

1) A point at which rays of light or other radiation converge or from which they appear to diverge, as after refraction or reflection in an optical system: the focus of a lens. Also called focal point. 2) To adjust the eyepiece or objective so that the image is clearly seen.

For more information on focus, click the link to the Lasers pamphlet.

1644, from L. focus "hearth, fireplace," of unknown origin, used in post-classical times for "fire" itself, taken by Kepler (1604) in a mathematical sense for "point of convergence," perhaps on analogy of the burning point of a lens (the purely optical sense of the word may have existed before 1604, but it is not recorded).

This prism will revert the image and, at the same time, it will deviate the line of sight by 115 degrees. 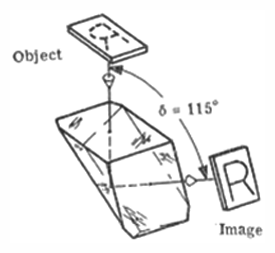 This prism inverts and reverts the image and deviates it by 60 degrees. 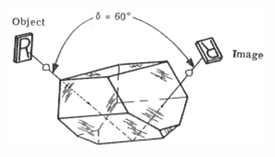 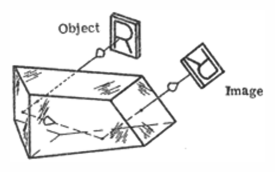 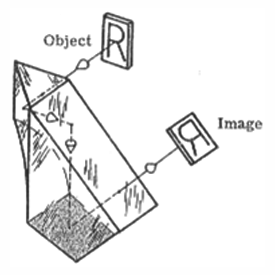 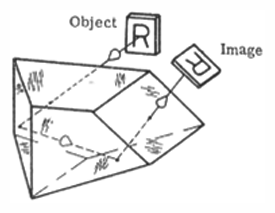 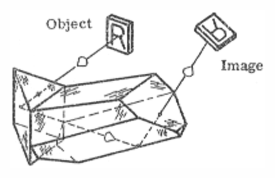 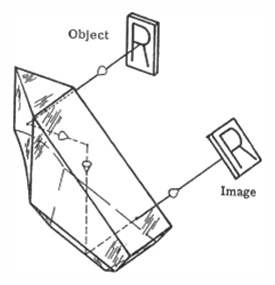 The diffraction pattern of a source observed at an infinite distance from the source. “Far field diffraction.”

The number of times a vibrating object oscillates (moves back and forth) in one second. Fast movements produce high frequency (for sound this results in a high pitch/ tone), but slow movements mean the frequency (pitch/tone) is low.

For more information on frequency, click on the link to the Echolocation pamphlet.

The lowest order mode (lowest energy) of a waveguide.