Fundamental frequency, with first and second harmonics below.

An interference pattern that is recorded on a high-resolution plate, the two interfering beams formed by a coherent beam from a laser and light scattered by an object. After formation, if lit and viewed correctly, a 3-D image of the object is seen.

1949, coined by Hungarian-born British scientist Dennis Gabor, 1971 Nobel prize winner in physics for his work in holography, from Gk. holos "whole" (in sense of three-dimensional) + -gram. Holography "process of using holograms" coined 1964 from hologram on analogy of telegraphy/telegram. 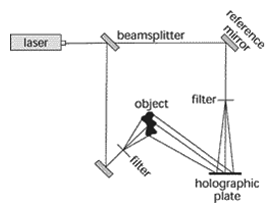 A property of substance that is the same in all directions.