The increase in a signal that is transmitted from one point to another.

A gain medium is either a gas, liquid, or solid that provides means for optical gain, which is generated by stimulated emission on transitions from higher to lower states. It can amplify the power of light.

To learn more about gain media click on the link to the LASERS pamphlet.

To learn more, click on the link to the Lasers in Everyday Life pamphlet.

Geometric optics is also known as ray optics. It is a field of physics that deals with light as if it truly were composed of rays diverging in various directions from the source and are abruptly bent or turned by refraction or reflection.

A noncrystalline, inorganic mixture of various metallic oxides fused by heating with glassifiers such as silica. Silica (SiO2) is a common component of glass.

This prism system consists of three single prisms. The system inverts and reverts the image. The image is also displaced by an amount depending on the distance between the first and second prisms. 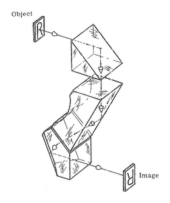 1) A framework or latticework having identical parallel rods that are evenly spaced. 2) In optics, grating is any repetitive structure that can separate the light into its constituent wavelengths. Commonplace CDs and DVDs have fine grooves carved on them, which creates a reflective grating. Physicists and astronomers often use diffraction gratings to determine the wavelengths composing the light being viewed.

To learn more about gratings click the link to the Solid-State Lighting Pamphlet.

A specific, right-angle prism having a transmission grating replicated on its hypotenuse face and used in applications requiring a system that can produce in-line viewing for one wavelength. 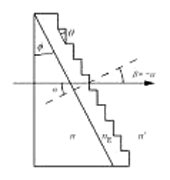 A spectroscope having a diffraction grating for the resolution of light of various wavelengths. 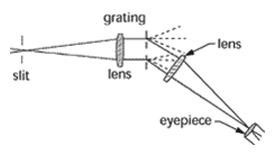 To learn more, click on the link to the Fiber Optics pamphlet.

In optics it is the process in optical system manufacturing that gives an element, such as a lens, its required shape.

1) A device used to measure or maintain orientation, for example, latitude, longitude, and altitude. It is based on the properties of angular momentum and usually consists of a spinning wheel or disk that is free to rotate to any orientation. 2) Often a ring laser is used as a gyroscope. Ring lasers consist of two beams of light of different frequency, the same polarization, and traveling in opposite directions around a closed loop. The loop often consists of a solid block of glass-ceramic material with holes drilled the length of all four sides, and mirrors attached to the corners to form a closed path. When the device is stationary, the optical paths traveled by the two beams are identical. Rotation of the cavity causes a difference in path length between the two beams that can be measured. 3) Fiber optic gyroscope (FOG): An instrument to measure angular rotation, based on the principle that the application of force will alter the wavelength of light as it travels in one direction or the other around a coil of optical fiber wound on a drum. The change in rotation causes a change in the interference pattern produced from the end of the coil, which can be measured.

1856, invented and named in Fr. 1852 by Foucault, from Gk. gyros "circle" + skopos "watcher," because the device demonstrates that the earth rotates. 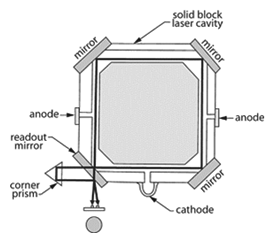