This is controlled by the page's Image field

Optics is rays, waves, and photons

Optics is rays, waves, and photons. A wave is an undulation that propagates from one point to another, and as it travels it carries the energy of the electromagnetic spectrum. It is made up of one or more periodic oscillations (sinusoids) that each has its own wavelength, frequency, amplitude, phase, and polarization. The polarization of light refers to the direction in which the wave of EM Rad is oscillating. The phase of a periodic wave at a certain position on the wave is the fraction of the cycle that the wave has completed. This fraction is always measured from a reference point. A wavelength is the distance between two adjacent points of corresponding phase on the wave. The amplitude of a wave is the maximum value that the wave achieves on the ordinate axis.

The frequency of a wave is the number of cycles that the wave completes over a given length of time. Frequency has units of Hertz [Hz] (1 Hertz = an inverse second [1/s]). The frequency of the wave can be easily computed using the value of the wavelength. In vacuum (or air, to a good approximation), the frequency (n) and the wavelength (l) of an EM Rad wave are related using the speed of light in a vacuum (c = 3 x 108 m/s): c = nl. This wave has a frequency n = 5.45 x 1014 Hz. To learn more, check out the discussion of the Physical Optics branch.

A ray is a way of geometrically representing the path of EM Rad as it is emitted from a source and travels through a system. Rays are a simplified way of thinking about waves: they have direction but no phase, so one ray cannot interfere with another, and they are drawn normal to the propagating wavefront.

Energy lost by an electron (e) as it drops to a lower energy state can be radiated as a photon. Higher energy photons have shorter wavelengths.

Science and engineering have always relied on models to explain and predict the behavior of the physical world, and optics is no exception. Three important models are used to describe optical phenomena, and each is based on one of the three different ways of describing EM Rad.

The Ray Optics model, which represents EM Rad as rays, is the simplest of the three. People who first studied and described the behavior of visual light created the Ray Optics model. It’s a very good model to use when the wavelength of the EM Rad is much smaller than the dimensions of the smallest optical component in an optical system. This model can be used to describe how simple telescopes work, how mirages form, and what you’ll see when you look into a mirrored surface (go to the Geometrical Optics section to learn more). The Ray Optics model is used extensively in the field of Geometrical Optics. It’s a good model, but there’s a lot it can’t explain and predict.

The ray model can explain how a prism splits white light into its individual color components.

The electromagnetic wave optics model can explain why a plane wave passing through a pinhole generates a shadow that looks like a central dark spot surrounded by concentric rings.

The Quantum Optics model uses the idea that EM Rad is made up of photons. It was developed when researchers observed phenomena that the other two models could not explain. It is the most complex model of the three, and it includes the theory of both the Electromagnetic Wave Optics model and the Ray Optics model. The Quantum Optics model is needed to explain how lasers work, the photoelectric effect, and the principles behind optical spectroscopy. 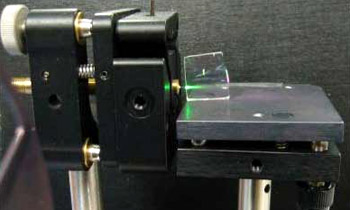 The quantum optics model can explain why glass doped with erbium atoms emits green fluorescence when it is hit by a strong beam of EM Rad with a wavelength of 980 nm.

It may seem wise to use just the Quantum Optics model, since it includes the theory used in the other models, but the Quantum Optics model is so complex that it is useful only for describing certain phenomena. Trying to use the exact form of this model to describe how an eyeglass lens focuses visible light would overwhelm a supercomputer, but it is an easy problem to describe using the Ray Optics model. Scientists and engineers use the simplest model that adequately describes a system; if they use a model that is too complex, it won’t give them additional useful information – it will only waste their time! The trick, of course, is knowing when to use which model – this can be learned through coursework and experience.