Dr. Rebecca Richards-Kortum specializes in the development and use of laser spectroscopy for diagnosing diseases in human tissue, specifically the early detection of cancer. "We are looking at how well patients and providers accept this technology, and seeing what impact the devices actually have," she says of her research, which currently is focused on finding pre-invasive cervical cancer, and head and neck cancers.

A professor of biomedical engineering and associate chair for research, Richards-Kortum's work grew from a burgeoning interest in math, physics and biochemistry, and her own undergraduate introduction to lab research, first as a freshman and later as a junior at the University of Nebraska.

"I thought I was going to be a high school math teacher, but when I was a freshman, the chairman of the physics department went out of his way to make a spot for me in his lab," she recalls. "I got to do research for a year. It was basic semiconductor physics work. Even though I liked that research, I wanted to do something that would impact humanity in a much more direct way."

"Later, I got the opportunity to work in biochemistry. I wanted to do something that could blend the two, so when I heard about the field of biomedical engineering, I realized that was exactly what I wanted to do," she adds.

As a Howard Hughes Medical Institute (HHMI) Professor, she hopes to give undergraduates the same early exposure to research that influenced her own career, opportunities she believes are rare today in undergraduate education. Moreover, understanding the field of medical technology development is important in order to make informed decisions about personal health care and to contribute to debates about public policy, she says.

Dr. Richards-Kortum is the Stanley C. Moore Professor and Chair of Bioengineering at Rice University. Previously, she held the Cockrell Family Chair in Engineering and was a Professor of Biomedical Engineering at the University of Texas at Austin, where she was also a Distinguished Teaching Professor. After receiving a B.S. in Physics and Mathematics from the University of Nebraska-Lincoln in 1985, she continued her graduate work at the Massachusetts Institute of Technology, where she received an MS in Physics in 1987 and a PhD in Medical Physics in 1990. That same year, she began her academic career at The University of Texas in the Electrical and Computer Engineering Department as an Assistant Professor, (1990), Associate Professor (1995) and Professor (1999). She joined the Department of Biomedical Engineering at UT Austin when it formed in 2001. 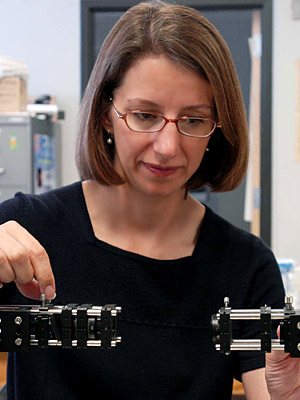